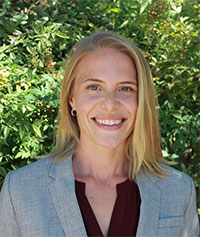 Aviva Simon joined Berkey Williams LLP as a 2017 Summer Associate and returned as a 2018-2019 Indian Law Fellow. Now as an associate, Ms. Simon enjoys serving tribal clients in all of the firm’s practice areas, and regularly practices in the areas of water and property rights, employment, health, taxation, and Indian child welfare.

Ms. Simon’s interest in Indian law was sparked by an undergraduate course in American Indian Sovereignty. After earning her B.A. in 2013 from The Evergreen State College in Olympia, Washington, Ms. Simon worked as a Paralegal for Port Madison Enterprises, the business agency of the Suquamish Tribe, drafting contracts protective of tribal sovereignty and keeping minutes at Board meetings. After the birth of her daughter, she moved to California to attend U.C. Davis School of Law, where she earned her J.D. in 2018.

During law school, Ms. Simon worked as a Research Assistant, examining tribal innovations in policy and the influence these innovations have had on local and state governments. Ms. Simon was a Summer Associate at Berkey Williams following her second year. As a third-year law student, Ms. Simon worked as a legal extern at California Indian Legal Services’ Sacramento office, where she developed and presented resources to tribal clients about the Federal Recognition process and Public Domain Allotments in California.