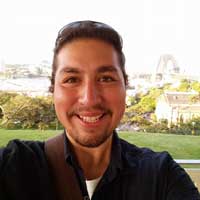 Vince Redhouse is a member of the Navajo Nation.  He received his law degree from the James E. Rogers College of Law, University of Arizona in 2021.

During his undergraduate work at the University of Arizona, Vince was heavily involved with the Native American Student Affairs and Tucson Native community.  As a result of his dedication to the Native students and the community, as well as his academic work, Vince received the Provost Award for most outstanding transfer student and was also named to the Honors College’s Pillar of Excellence.  After completing his undergraduate degree, Vince accepted the Anne Wexler Fulbright Award in Public Policy and used it to pursue a Master of Philosophy degree in Philosophy at ANU.

Vince graduated from the UA James E. Rogers College of Law in 2021, where he received the Indigenous Peoples Law & Policy certificate.  While attending law school, Vince interned with the Navajo Nation Department of Justice,  the Department of Interior’s Solicitor’s Office Division of Indian Affairs, and several private law firms.  In addition, throughout law school Vince served as an Executive Board member of the UA American Indian Alumni Club and oversaw the Club’s mentorship program.